In Memory of
Dale James "Crab"
Chedville
1955 - 2018
Click above to light a memorial candle.
Memorial Candle Tribute From
Gallagher Funeral Home and Crematory
"We are honored to provide this Book of Memories to the family."
View full message >>>
Send Flowers
Menu

In the event that there is an error
in the information presented,
please contact the funeral
home by clicking here. 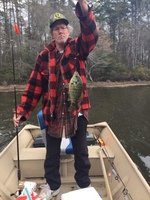 Mr. Dale "Crab" Chedville, 63 of Pollock, Louisiana, formerly of the New Orleans area, entered eternal rest on Saturday, Novemeber 3, 2018 at Woods Haven Nursing Home. "Crab" was a homebuilder by trade and a very unique individual. He was a very intelligent man, bordering on genius, who knew a lot about many subjects from astrology to zoology. While intelligent, he was a very quiet, introvert who preferred to write eloquent poems and letters.
This unbelievable human being will be missed by many including his mother, Janet Chedville of St. Amant, La.; one sister, Denise Taylor of St. Amant; five brothers, Gary Chedville of Gonzales, Darryl Chedville of Alexandria, Mark and Glen Chedville of Gonzales and Chris Chedville of St. Amant, La.
Dale Chedville was preceded in death by his father, Thomas Chedville.
To extend online condolences to the Chedville family, please visit www.Gallagherfh.com.